I found a pool about a 30 minute walk from my hostel.  It took me a few days, asking everyone around me if they knew of anything worth looking into, but I found one.  I was impressed enough by the look of the 50 meter (olympic size!) pool to sign right up for a three-month unlimited pass.

It felt so good to get back in the water after months apart.  My first day was embarrassing and I felt ashamed to be representing American athleticism, especially because everyone stares at me in my red speedo.  I did a light 1,000 meters and hit the showers.  I DIDN’T BRING A TOWEL.  Come on Jim!  I walked into the main lobby, dripping wet in my speedo, and asked if they had one.  They told me I could buy one but it would be small.  “Who cares?” I thought.  Oh, after I got a look at this towel I started to care.

But after my third day going I noticed something, why don’t I smell like chlorine?  The only reason an adult wants to get back in a pool rather than a gym is because the smell of chlorine on their skin brings them back to a time when they had hormones raging, and were releasing an obscene amount of endorphins on a daily basis.  But I don’t have that smell now, and neither does the pool.  I’m not too sure how clean the pool is, I don’t really think I want to know.

More frustrating than the lack of chlorine, my beer gut, and the tiny pink towels is the staring.  I’ve already noted how everyone stares all the time, and some of the time I don’t mind because it makes me feel like a rockstar.  Staring at my penis when I’m changing however, well, that’s a different ball game.  There I am, already mostly naked, toweling off in front of my locker, when everything starts to get real quiet.  I can feel the men in the locker room start to divert their eyes downward as I untie the suit.  Their eyebrows raise up a little, not in a hungry-we’re gonna ride the train- look, just curious what type of machinery an American 28 year old might be working with.  As I drop trou I make sure that I’m making eye contact with as many as I can to show I’m not embarrassed.  Some see me looking at them and shyly laugh at being caught staring, but most just look back at me unabashedly, nodding their head, as if to say that my status as a foreigner gives them the right to inspect my package for the sake of the People’s Republic.   Well that’s just fine.  Stare away my friends.

I’ve started to make a few more friends just from walking around and talking to people.  A girl I met at a restaurant invited me to go and have dinner with her about an hour away.  The cab would have cost me $16 one way to get there, and the bus cost me 16cents.  That bus was the first real culture shock I’ve had since arriving here.  You think the L train during rush hour is packed?  There wasn’t one millimeter of space between any body parts on this bus and I had to stand there, not moving, trying my hardest to keep my hand where I could feel my wallet and phone, for 90 minutes.  It was brutal.  So I met her at a Starbucks which reeked of America and it smelled so so so good, and then we walked around and got some different Shandong province style food.  Her name is Joyce.  She wears black zip-up hoodies, bright silver chucks, and skinny jeans.  She’s like that friend you had in high school who sat at your lunch table but was way out of your league because she only dated musicians who were 5 years older.  She was decently patient with my Chinese and gave me a better bus to take on my way home.  The ride was pretty smooth with the only hiccup being that the woman next to me kept asking me in English if I knew that Jesus loved me.  When I responded that, yes, I had heard something like that, she took that as a hint that I was religious and started to inquire how deep my faith was.  I let her down easy and when she left she made it clear that if I ever wanted to look for him, I wouldn’t need to look far.

Last night I was invited by some new Chinese friends to another location 45 minutes outside of the city, Huangdao, to go see a movie.  I had been studying Chinese characters all day and my brain hurt so I made the trip, paying the equivalent of $10 for the 45 minute cab ride.  I just didn’t have the strength in me to figure out the bus schedule.  It’s very stressful.  We were going to see Inside Out, and I assumed that since it was an animated movie in China, the voices would be in Chinese.  But. . . . . to my ultimate satisfaction, it was all in English, with Chinese subtitles.  Oh, how wonderful Amy Poehler’s and Lewis Black’s voices sounded to my ears.  Not to mention, the movie is incredible!  Bold move by Pixar to use a young girl’s emotions as a movie premise. 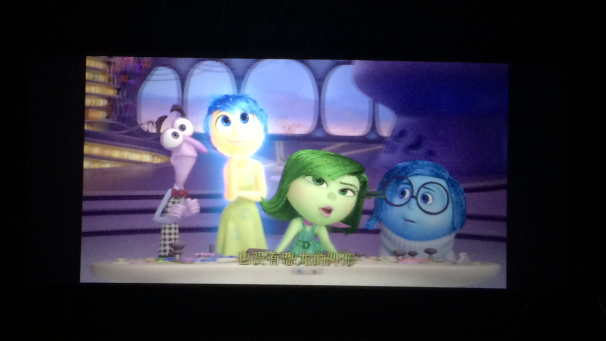