The next day I checked out of the foreign students dorm and headed to a hostel that my local friend Maci had told me about.  What a surprise to find the nicest dorm I’ve ever seen in Shenyang, China, with no advertisements on any major travel website.  It’s also one of the few hostels in all of China that is privately owned.  Lazybee hostel and cafe operates as a chill coffee shop with couches and guitars on the bottom floor, and two floors of dorm rooms above it.  The beds are enormous and comfy, like, really comfy. This nice hostel alone has made me extend my stay in Shenyang from two days to maybe a week.

The town certainly has changed over the past eight years.  Instead of four bars in the whole city there are five on my block alone.  I made plans to meet up with Katie and Fritz on my second day.  During my last stay in China there was a family of four from central Pennsylvania staying in the adjacent dorm, Katie and Fritz were their 15 and 16 year old kids.  Katie was in my class and Ren and I took it upon ourselves to try and corrupt the young Fritz with alcohol and wild stories of college life.  It was a great reunion with them, we went to have dinner around the old university and had some classic dishes that we all used to eat.

Everyone is all grown up! 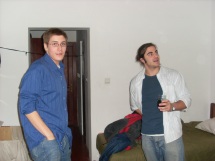 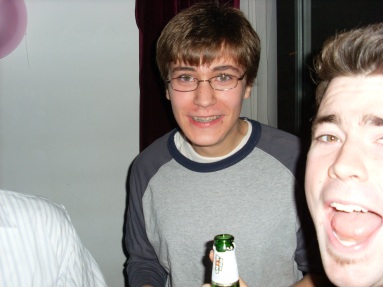 The next day I met up with Maci.  Maci, Maci, Maci, Maci is a 5’nothing fireball of American-Chinese energy from Chicago, who was living in Shenyang eight years ago when Ren and I met her at a club.  Now she’s married and waiting to start her med school residency in the states.  She invited me over to eat some home cooked food, and I had farrrrrrrr too many brownies.  No, no, no, not those brownies, you stoners, just regular chocolate ones.  Then it was time to wander back to the hostel and await the midnight hour when I would turn 29. 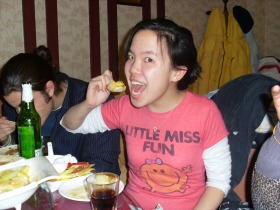 I walked into the hostel to find a group of Chinese travelers, about early twenties, gathered around a table playing a card game.  Mostly guys but about six girls as well.  As I walked by they all shouted “hello!” and asked if I would like to join them.  Well, I sure would, it’s my birthday in a few hours.  “HAPPY BIRTHDAY!  they all shouted kind of in unison.  I sat among the young guns and they informed me that they were playing a game in which everyone draws a card, and those who pick the highest card get to give either a truth or dare to the person who drew the lowest.  Oh my.  Truth or dare?  But there was no alcohol in sight.  SOBER truth or dare?  SOBER truth or dare in CHINA?  It can’t be.  How could I possibly navigate this?  Well I could just sit and watch to learn a little bit about the proper way to play this game.  Tough luck Jim – I drew a King on the first round and was faced with the task of either giving a dare or asking a question to the girl across the table.  She was pretty, had hair cut just below the ears, and was wearing a long navy green coat that I got used to seeing while in Korea.  When the rest of the group saw who had drawn what, they all gave an “ohhhhhhhhhhhhh!” in anticipation of what this foreigner would come up with.  She chose to answer a question and I panicked.

Hmmmmmm.  I know what I want to ask her.  I know what I would ask her in New York.  I have like 15 things I would ask in New York.  But there is no social lubricant around!  And some of these people are clearly teenagers, 18 or 19, yes, but teenagers.  Go deep Jim, go back to before alcohol when you were in Junior high and praying to god that a girl might sit next to you so you could possibly graze your arm against hers and then think about that for the next two weeks.  You used to play this back then, right?  Questions like, “who would you kiss in this group? or  have you ever drank beer?”  Things like that.  No, no, no, no, play it safer.  Nothing sexual yet.  Ask her about travel.  YES!  Everyone here is a traveler, that’s a perfectly safe idea.  Ugghh but it’s so boring.  I know all these guys just want to do the damn thing anyway.  NO, keep it cool man, keep it cool!  Ok, here it goes.

“If you could travel anywhere for a week, alone, where would you want to go?”

“Seriously?!!!!!!  Oh my god, that is so boring!”  I’m pretty sure I saw some people in the crowd smile at my question but all I heard were the two guys to my right who were clearly disappointed. And that was all the convincing I needed.

“Oh. .  .ok!  Ever had sex with two dudes at the same time?”  It took about 2-3 seconds for everyone in the group to translate that question, slowly but surely all their eyebrows went up as their jaws went down.  Whoops!  Well, that really got the party started, let me tell you.  She hadn’t, by the way, because she was a virgin, as were about half the people in that group.

There’s really no going back after something like that is asked, and in about ten minutes most people had a beer in their hands and my birthday party got taken to a whole new level.  I learned so many useful phrases in Chinese such as, “on all fours”, and “fun with butt”, important vocabulary which I then happily translated to their English equivalents for my new friends.  Fast forward to 11:59pm, we’re all upstairs in the lounge on bean bags and couches watching some sort of American Horror Story.  Cuddled on my left -the girl I had previously asked the question to, who, from then on took every opportunity to look me in the eye and smile at me, to my right – a mid twenties Chinese guy with bleached blonde hair gelled over to one side who, during the times he was able to question me was entirely too interested in my past sexual history with men, and I thought to myself, “this is the final birthday I’ll have in my twenties.  This. . . . well. . . yeah, this makes sense.”