This is my third time in Spain and each time I arrive I think, “What’s the point of living anywhere else?” Spain has it all – paella, gorgeous people, good weather, and they speak Spanish. My heritage is supposedly 100% Irish but they clarify that as “Black Irish”. This means that someone in my ancestry had an affair with a Spaniard. And by “have an affair,” I mean that someone was raped by Spanish invaders. I know that’s horrible but the entire country shuts down every afternoon to take a nap so it’s difficult for me to hold a grudge.

I arrived in San Sebastian at 7:15pm and made it to the hostel at 7:30. By 7:45 I was on a pintxos tour with about 20 people – mostly Australians. Pintxos are small snacks and sandwiches that line every bar in the Basque country and for two euro you get one and a drink. It’s another example of the Spanish penchant for brilliant simplicity.

I had been moving around so much up to that point that I woke up in the hostel and laid in bed for a few hours. I browsed through Netflix for a while and chatted to some people in my hostel room. There was an Asian girl from Toronto and another girl from Santa Cruz. I watched one of my favorite short films The House of Small Cubes. It’s on netflix and animated. But not animé, just animated. Like a classy disney movie.

It was time to get some food so I dragged myself out of bed and brushed my teeth. As I walked past the bathroom there was an older woman standing and facing the wall. She was about 80 years old and had each of her hands on one of her ass cheeks. Because of this her pants were pushed down far enough for me to see things. First of all, why was she in the hostel? And why was she staring at the wall like that? I only mention this because it was so surprising I almost yelled out. The image has stuck with me to this very moment.

That night I went out for a few drinks with the Canadian girl. She was a heavy smoker and very into Crossfit which is my new favorite personality combination. We met some locals and they all convinced me to smoke a cigarette, a move I constantly regret.

At 11am the next morning I took a bus to Bilbao which is another city in Basque country. It used to be the most polluted city in Spain, with the economy running on mining, but it’s become a beautiful place. This is the city that Andrea and her friends were from – the girls I met in Beijing. Andrea’s best friend, Itxaro, came to meet me at my hostel around 5pm with another one of her friends, Javier.  Itxaro and Javier took me to the Guggenheim museum in Bilbao. It was an architecturally beautiful museum with some cool exhibits. Everything was written in Spanish, Basque, and English and I stood inches away from the Basque writing while Itxaro smiled and translated individual words I pointed to. So many Zs. 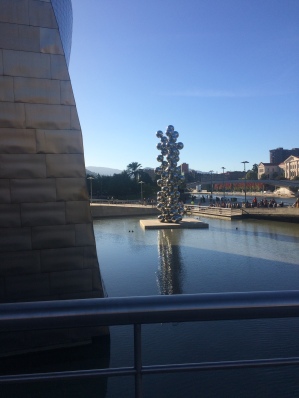 After an hour or two Itxaro looked at me across one room and made a beer drinking motion and I nodded in approval. 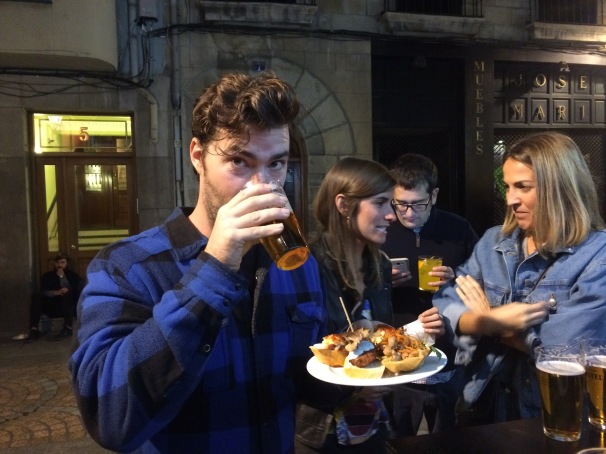 We walked along the river and I asked them all about the Basque country and it’s history with France and Spain. It has significant autonomy from the Spanish government and the tensions with Madrid have calmed down over the past few years. I didn’t want to mention the ETA but Itxaro brought them up to say that it was bad before but now they live in relative peace as a part of Spain. Javier asked me a bit about Trump and I saw my chance to pivot over to Catalon separatist movements. Every day since I started this trip Catalon independence has been a top story on the news and with the independence marches and the resulting police crackdown it was surely on everyone’s mind especially in a region like the Basque country which has sought independence for centuries. It was also four hours into drinking so everyone was politically lubricated. A few of their friends had joined us. Javier smiled and held his beer tight to his chest as he tried to give me an American example of what the situation is.

“Imagine if Texas wanted to leave the US. What would you say.”

Itxaro threw her hands up in the air and shook her head “Bad example!” She was losing her sense of personal space and leaning in close to me to make her point. I was completely fine with this. She said that the vote for independence in Barcelona and the whole Catalon region was illegal and was a show of balls from the local government (at this she put her hands down and cupped her groin and emphasized the word “Cajones”) and said that nothing would have come from the vote so the police crackdown was stupid.

“Just two guys trying to see who has the bigger balls,” Javier said in English with a smile.  “Similar to Trump and North Korea, no?”

Ahhhh North Korea. I gave in to all the cigarettes being offered and we started doing shots. Beers, tapas, shots, cigarettes for 10 hours total and flash forward to me in a club dancing in a circle. I had been talking with one of Itxaro’s friends who was quite possibly the drunkest of the bunch and Itxaro danced over to me to tell me I should go back to her friend’s place. I considered for a moment and shook my head no.

She didn’t hear me. “What?” she yelled into my ear.

“I’m interested in YOU.” I said. She leaned back and looked at me funny. Then she lifted her hands in the air again and turned from side to side. She started pointing to all the girls around us.

I told her we should talk about it outside and she smiled at the idea of a cigarette. It was 5:30am at this point, we had been drinking for 10 hours, and by the time we got outside to smoke she had completely forgotten why we were there and started chatting with everyone. Javier joined us and although Itxaro told me before that they weren’t together I asked him if he liked her. He thought for a moment with the same smile he wore all night, shrugged, and said yes. “Nice.” I said. “I gotta go home,”.

I had the bed by the door and what a heavy door it was. It slammed all morning and if it weren’t for all the shots I would not have been able to sleep at all. I awoke at 12:30 to one of the worst hangovers I’ve ever had. I cursed my drunken ass and the inventor of cigarettes and vowed never to smoke again.

After a night of that magnitude, Eric Clapton’s River of Tears was really hitting the spot.

It’s three miles from the river, that will carry me away

And two miles to the dusty street, that I saw you on today

It’s four miles to my lonely room, where I’m gonna hide my face

And about half a mile to the downtown bar, that I ran from in disgrace

And then again with

In three more days I’ll leave this town, and disappear without a trace

A year from now maybe settle down, where no one knows my face

Made for wonderful hungover travel music. I knew that the day was gone and that all I could possibly do was to watch a movie and try to eat a kebab. I sat in the common area and felt a need to hear music from Kentucky so I looked and discovered that one of the girls that was in my banjo class was kind of a big deal. She spent a while touring with the artist Bonnie “Prince” Billy. His song “I see a darkness” was covered by Johnny Cash and I listened to his original all day. The day was no longer wasted.

As if I needed any more emotion, I found The Perks of Being a Wallflower on Netflix and just oozed with angst and nostalgia until I passed out early.