I left Venice on a train bound for Trieste. It’s a small town on the sea near the Slovenian border. I went there because that’s where Claudia’s family is from and I figured it must be beautiful. One night was enough and I walked along the water and had two spritzes and read more Tropic of Cancer.

The next stop was Slovenia, one of the goal-locations on this Euro-trip. In 2007, while living in Shenyang, I befriended three Slovenian girls who lived a floor below me. One of the girls was Andreja. We became close, and I remember that we would argue sometimes, probably because it was my first time so far away from home and I would pick fights with people when I was homesick, but through all that we formed a strong bond. There was always an invitation to visit Slovenia, and so I went.

She picked me up at the MacDonalds in Ljubljana with her boyfriend, Luca. I hadn’t seen her in ten years and she looked exactly the same – a beautiful woman with a kind smile and laid back demeanor. They took me to get some food. Every time Luca would leave to smoke a cigarette, Andreja and I would leap into talking about the old times in China. We had two IPAs and I ate turkey schnitzel. Then we went to a bar in central Ljubljana and I had some wine. Pretty delicious. It was a bar on the top of a theater, or opera – something artsy and there were skinny pretzel rods there. Did you understand what I just wrote? There were pretzels on the table. My favorite snack that I shiver in my bed longing for. I took seven to fifteen at a time and ate them like a gorilla eats bamboo shoots.

They drove me back to their house. It was 20 minutes outside central Ljubljana in the valley of a few mountains. It was dark but all I could hear was nature. There was a river close by and I could kind of make out mist against mountains. We sat in their living room and I felt comfortable. . .   because . . . everything was comfortable. This was a house to strive for and I decided that I would stay for a few days. 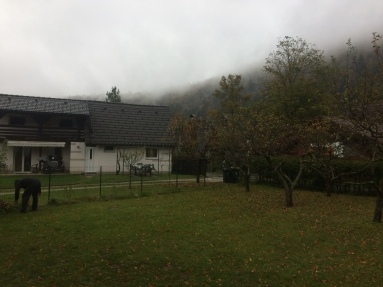 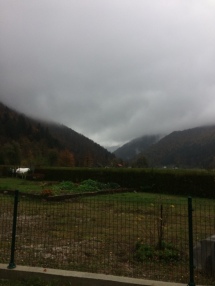 Luca put on music in the background and we started talking politics. I had no idea that Slovenia was part of former Yugoslavia which I could see slightly offended them. Luca was old enough to remember the war that separated Slovenia from Yugoslavia and they talked about how only ten people we killed.

“It could have been much worse,” Andreja said.

Luca brought out liquor that his grandmother made, Zima, and some very expensive rums. Andreja put Pink Floyd’s ECHOES, live at Pompeii on the tv. I never got into Pink Floyd. I sort of liked “Wish you were here” and I thought “Another Brick in the Wall” was fun, but meh, I didn’t even know what the band members looked like. I never did the Dark Side of the Moon/Wizard of Oz thing and I never, ever saw this video. Luca poured me a glass of the most expensive rum and Andreja told me all about Syd Barret. The rum moved through me and my exhaustion and I got hypnotized by the slow moving camera behind the amps and David Gilmour’s long hair and Roger Water’s awkwardly tall frame on that bass. It was all delicious.

The next day they took me to a small town called Štanjel. Then we drove to another small town and sat down for some wine. They got a liter each of white and red and ordered an enormous plate of meats and cheeses. We decided to drive back to Italy, back to Trieste, the same town I had come from the day before. We walked around the main part of town and sat down for some coffee. 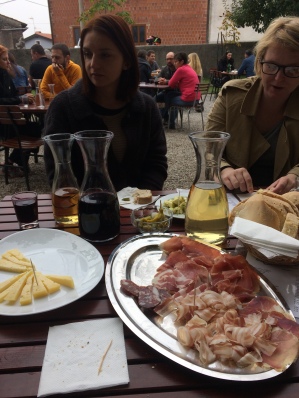 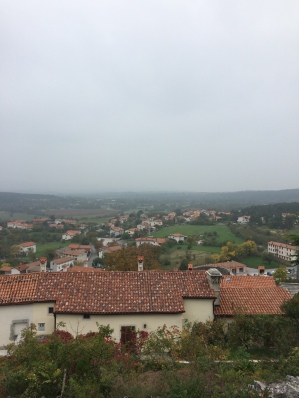 I slept really well and didn’t get out of bed until 10:30. I did my laundry and walked downstairs. Luca had decided to make goulash that day. He slow-cooked beef for 8 hours with onions until the texture was creamy.

It was raining but we had bought chestnuts the day before and Luca set up a fire in their backyard. I brought out the banjo and we talked about music. 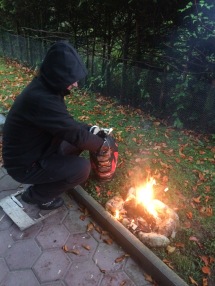 Andreja was inside giving an english lesson to a teenage Slovenian girl via skype. I walked in to take a piss and sat down and chatted with the girl on her computer. I tried to keep it kosher but within the first minute I brought up the movie The Shining and when she mentioned that she might be going to New York I implored her to avoid going into any subway car that’s empty during a busy hour – talk about a loss of innocence. For lunch Luca had cooked liver and onions and it was delicious. After we sat outside for chestnuts we ate the goulash and talked some more. 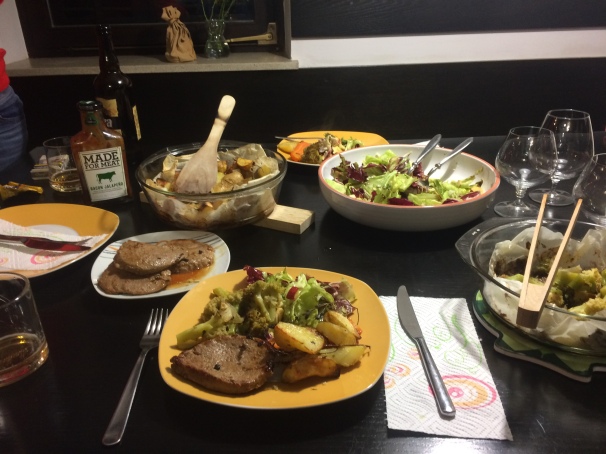 Pink Floyd was on the tv, again. They told me more about Syd Barrett and how Shine On You Crazy Diamond was really their song written for him. Andreja showed me a picture of when he was young. A tall, dark, handsome man. And then she showed me the picture of him a few years later.

When we were outside I took a look at the mountains surrounding their house and told her that a lot of people would consider this a paradise.

On Monday I left the house at 1pm and took the bus towards central Ljubljana.  I went to the ethno-something museum but it was closed and then got some Chinese food. Shumai and mapo tofu. I went to the park and walked up the hill to the museum and sat in the cafe. 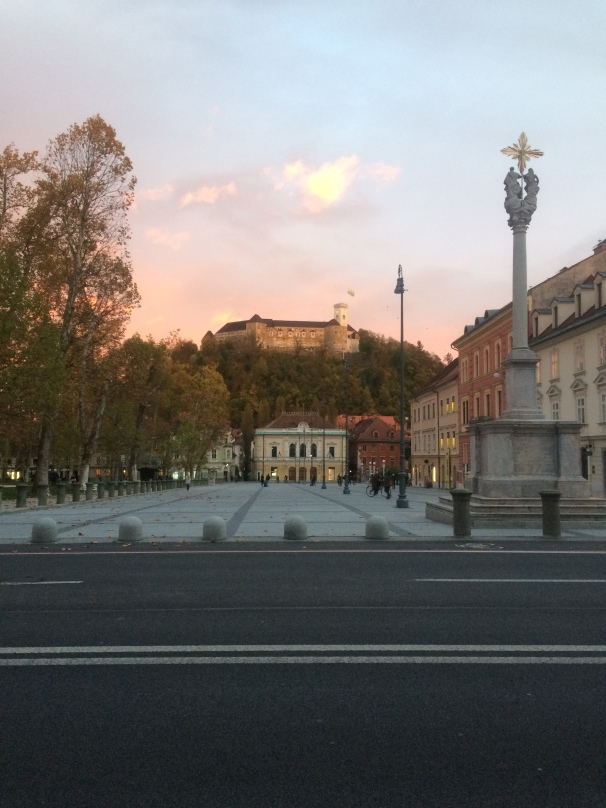 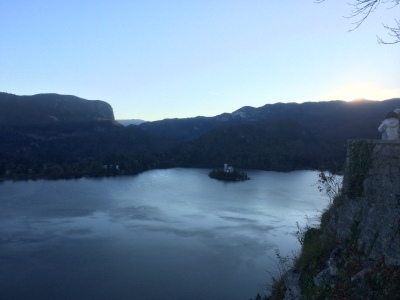 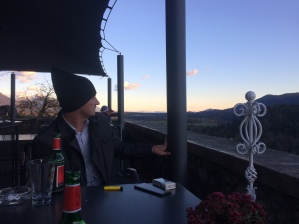 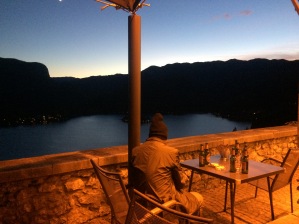 I needed to get back up to Krakow to meet an old friend and see Auschwitz so I told them I was going to leave for Poland via Hungary and Slovakia. On my final morning in Ljubljana, Andreja and I walked along a stream close to their house. 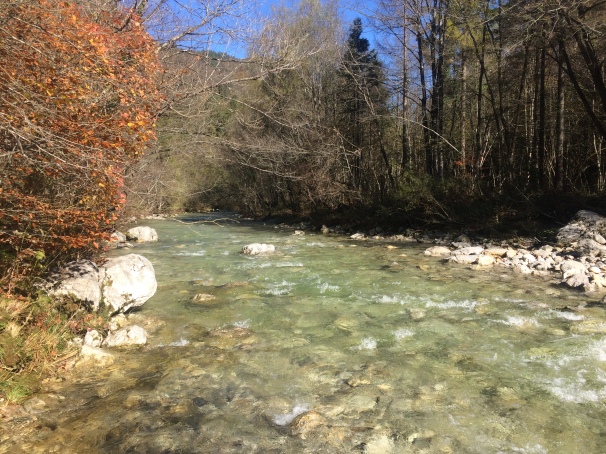 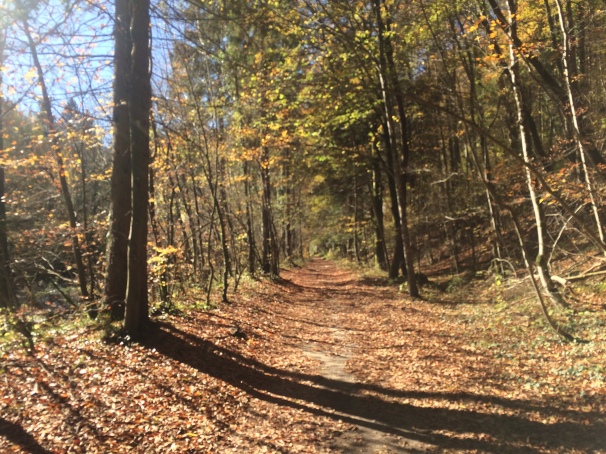 It was a highlight of the trip – Ljubljana with Andreja and Luca. Their house and company felt warm and wonderful. I was glad that the short time Andreja and I knew each other in Shenyang formed a friendship that lasted thus far. They were just so chill. They told me to take my time on the rest of the journey in Eastern Europe. Stop someplace for a few days and take a look around.