I woke up in Wroclaw. There were a few hours to spare and I sat at a really cool cafe that was playing Bon Iver’s For Emma, Forever Ago on vinyl but the record player was on the wrong speed so it was like Bon Iver was suddenly a country singer on cocaine. I kept looking around and smiling to see if anyone else noticed.

While I was in Spain and posting banjo videos an old friend got in touch with me. The oldest, actually, from before I moved to Pennsylvania. He was living in Dresden and loved playing folk music. We thought it would be a good idea to meet up for two days and . . .  go to Auschwitz together.

Tom met me on the street. He had his backpack and a mandolin. It was chilly and I was nervous. I hadn’t seen him in 23 years. We went into the room, a private one in a hostel with a shared bathroom on the floor. We chatted briefly and then, you know, what do you say to this guy who is technically your first friend but you haven’t seen him in 23 years and now he’s here sharing a room with you in Krakow, Poland and the next day you’re going to the most fucked up historical sight on the planet? I suggested we immediately go and get a beer.

Tom could have been a weirdo. He also could have turned into a psychopath but luckily he ended up being a nice, smart, funny guy. If I had randomly met him that day I would have considered him a good travel partner.

We went to the pub I visited after my first Auschwitz failure and caught up the best we could. The same tan, gay, fat, owner was there using his ridiculous American accent and overcharging us.

Next morning at 5:45 we woke up and walked to the main square. We took a tour bus (Mercedes Benz tour bus) for the hour ride to the first site – Auschwitz 1. Auschwitz was originally an army barracks for the Poles and when the Germans annexed Poland in WWII they used it to house Polish political prisoners. Then Hitler decided it was time to commit genocide and it became the largest concentration camp. The Germans expanded the first sight to include Birkenau (means “birch meadows”) and 1.3 million prisoners were sent there. Of those 1.3 million, 1.1 million died. About 90% were Jews. I spent the previous few nights binge watching the Auschwitz documentary series on Netflix for the second time and in a way I felt like I knew the place. But nothing could prepare me for the scale of this crime.

Our tour was done too quickly. They rushed us through the first site, Auschwitz 1, cramming our heads with information that we had no time to process. Then we went on a bus to Birkenau, the bigger site and it was another hour of too much information. We had no time to stop, no time to think, no time to feel. So when the tour was over after 2-3 hours Tom and I decided to stay and find our own way home.

If Auschwitz had been a cheese factory I would have marveled at German cheese making. Instead, it was a factory of death, unparalleled in it’s scale and efficiency. We walked across the green landscape passing row after row of stone chimneys, the only remains from the wooden shacks where prisoners were stuffed and left to die of starvation. 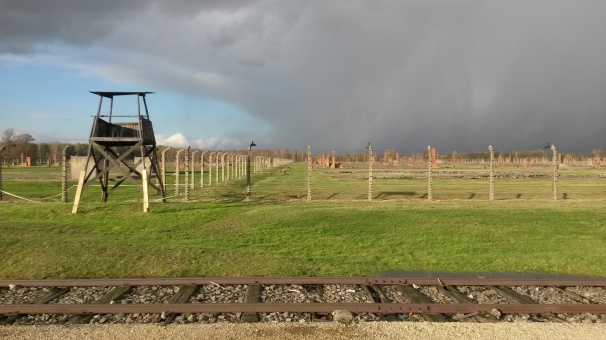 Generally walking in silence, Tom and I started to fill in the 23 year gap. We talked about personal experiences with religion during our younger years (Really, what lapsed catholic doesn’t feel shreds of guilt from masturbation? Isn’t that what makes it enjoyable?) and he told me about the writers and musicians he likes. Once in a while we walked past an information post that detailed who had stayed in the piles of stone behind it. There was a memorial to the Roma that had died there and I stood for a few minutes getting overwhelmed; I’ve always felt a strange connection to gypsies and I don’t know why.

We walked for hours seeing the remains of the crematoriums where they used Zyklon B to gas prisoners. I once saw a slaughterhouse and couldn’t get the picture out of my head. The Nazis built fake playgrounds to keep prisoners calm when the trains arrived and then used dogs and guns to frighten the prisoners underground where they stripped, and then into the showers with fake shower heads where they were gassed and left to die. For some people it took 10 minutes to die, for some it was 20. And for some people the amount of bodies stuffed into the gas chamber was so great that they died of suffocation before the pellets could be dropped in. Oh dear God.

We went back to Auschwitz 1 and wandered among the different buildings, each one with a different exhibit showing what had happened. The images of starving children with scars from Dr. Mengele experiments made me numb and I was left dealing with the other horror – the coldness with which these things were done. By this point Tom had been living in Dresden for six years and was fluent in German. The remaining tourists gawked at the displays of Nazi fabric made from the hair of victims (the fabric was tested to be human hair and contained traces of Zyklon B). Tom, on the other hand, was hunkered down over the original documents detailing the day to day workings of the camp. I would come over and he would translate the telegrams which explained that it would be better to remove the gold teeth of the victims after they were gassed but before they were burned. And which pliers should be used. And how the gold should be melted down and sent to the Third Reich. There were endless amounts of these documents. Tom read all of them.

Of the 1,100,000 victims at Auschwitz, 90% were jews. The rest were Roma, Homosexuals, Polish political prisoners, Soviet POWS, Jehovah’s Witnesses, and other groups. Countries allied with Hitler, like Slovakia, paid the Nazis to take their jews. And what makes it all so real and fucked up is that Hitler was democratically elected in Germany. Ah Germany, a country so efficient that despite losing two wars and being split in half for 45 years, it now has the strongest economy in Europe.

The sun went down and there were no lights to guide visitors. In the dark we came to the pillar where Rudolf Höss was hung. Then it was time to go, time for a drink; we had been there for 10 hours.

In Krakow we went to the same pub again. There was no ridiculous owner this time and the waitress already knew what beers we wanted. Tom and I talked for hours; doing Auschwitz together was like cramming 5 years of friendship into one day. The next morning after breakfast we spent our remaining few hours in the hotel, playing old time songs on the banjo and mandolin.